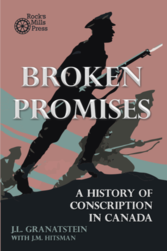 The only history of conscription in Canada, by one of Canada’s finest historians, now re-issued with a new introduction ...

​
Compulsory military service has always been a controversial issue, and nowhere more so than in Canada.

Award-winning historian J.L Granatstein considers the thorny questions it raises: "Is it worthwhile to impose conscription if by so doing you threaten to destroy the nation and the national unity that the men at the front are presumably fighting to preserve?”

This new edition of Granatstein’s classic account begins with a reflection about why he has changed his mind since first writing this book over thirty years ago. It remains the only history of conscription in Canada.

When Britain declared war on Germany in 1914, Canada sent a volunteer force. As the war progressed, however, reinforcements were needed. Quebec resisted, for demographic reasons, but there were larger questions as well: “To speak of defending French civilization in Europe while harrying it in America seems to us an absurd inconsistency,” wrote Henri Bourassa in August 1916. Bitterness and division were the product of poor government handling. Granatstein also explores how conscription did not go away following World War 1, but became an issue again in World War 2, the Korean War, and the Cold War.

Conscription has plagued Canadians for a century. Granatstein compellingly argues that no single issue has done more to muddy the political waters or to destroy the unity of the nation.

About the Author:  J. L. (“Jack”) Granatstein has been described by The Canadian Encyclopedia as “the most prolific Canadian historian of his generations,” whose writings are “characterized by lucid prose.” He taught for many years at York University, has served as head of the Canadian War Museum, and was named to the Order of Canada. His books include The Generals: The Canadian Army's Senior Commanders in the Second World War (1993), which won two national awards, and Canada's Army: Waging War and Keeping the Peace (2002).

BROKEN PROMISES
A History of Conscription in Canada
J.L. Granatstein with J.M. Hitsman