"This is the journal of a consummate story teller. War, death, madness, fury, despair, sheer grit, laughter, love, and exquisitely realized beauty and joy: all are rendered through the eye and 'I' of an artist for whom her journal was not so much a place as an act of engaging—a companioning of and questioning of herself. I suggest that this volume, covering 1918 to 1921, is one of the most important works in Montgomery’s entire writing career. Here we see her personal world shattered, and we see her consciously remaking it." —From the Introduction by Elizabeth Rollins Epperly

“Have you heard the news?” L.M. Montgomery records asking her husband Ewan as he arrived home on October 6, 1918, “hoping like a child that he hadn’t, so that I would be the first to tell him.” World War I had ended.

Montgomery’s words reflect the relief felt across the world as the war drew to a close. Her own life, however, did not relax as she might have hoped; rather, a series of unexpected events were about to unfold.

Elizabeth Rollins Epperly observes in her introduction that Montgomery’s journals are filled with moments of joy “suspended in a larger, often darker, story.” Here we read about Montgomery’s experiences with death, the spirit world, and insanity, among others. Her husband’s mental illness often makes for hair-raising reading. Available here for the first time is the complete record of Montgomery’s life, a spellbinding account of the small and the large, the tragic and the humorous.

Over 180 of Montgomery’s own photographs are included, many never before published. In addition to Professor Epperly’s fascinating introduction, this edition contains more than 400 notes providing a wealth of historical and literary background.

L.M. Montgomery's last four years in Leaskdale were marked by a series of unpredictable, and often unmanageable, events. Her account of these events, as they often twisted in increasingly unexpected directions, makes for spellbinding reading.  From 1919, Montgomery's life had been troubled by her husband's recurring bouts of mental illness. During the years recounted here, his mood distur­bances became profound: "I dare not remain here alone with him if he continues like this," she writes at one particularly low point. Other events added more complications to an already entangled life. A spurious lawsuit brought by a local farmer (claiming an enlarged prostate gland had been caused by a car collision) divided the community; Montgomery's description of the trial, before and after, is riveting. Communities across Ontario were also deeply divided by Church Union, which came to a head in 1925. Her occasional eyebrow-raising comments about members of other denominations remind us that she shared many of the biases of her time. Published now for the first time is the complete record of her life from 1922 to 1925, including the hundreds of photographs that she inserted in the handwritten journals.

The years following L.M. Montgomery’s departure from Prince Edward Island were among the most eventful of her life. She travelled in England and Scotland on her honeymoon; she began her new role of minister’s wife in Leaskdale, Ontario; she gave birth three times; and, in August 1914, she watched Canada go to war.

The original publication of Montgomery’s journals in 1987 contained only a selection of her entries. Published now for the  first time ever is the full record from 1911 to 1917, a wonderful account of the small and the large, the tragic and the funny. She delights in the birth of her  first son. A second baby, however, is stillborn on the eve of war. By the time her third is born, war has become a disquieting reality, with local boys dying overseas.

This edition includes all of Montgomery’s original photographs, many of which have never been published. The hundreds of annotations, completely new and exclusive to this edition, incorporate the most up-to-date historical thinking. A new preface by historian Jonathan F. Vance is lively and insightful.

Montgomery's record of global war and politics is fascinating; she would draw on it later in writing her novel Rilla of Ingleside, available in a newly annotated edition from Rock's Mills Press. Another new Rock's Mills Press title, Readying Rilla: L.M. Montgomery Reworks Her Manuscript, reveals how Montgomery crafted and revised her work. 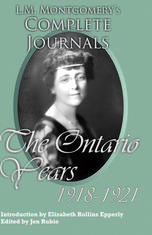 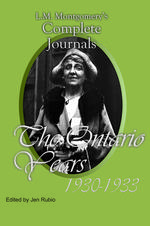 L.M. Montgomery's relocation in 1926 to Norval, Ontario, a village of striking natural beauty located on the Credit River, furnished her life with a bright new texture. She had lived 15 years in the small farming community of Leaskdale, Ontario, where she experienced her full share of life's highs and lows. Although Montgomery remained busy in Norval, working almost incessantly as an author, mother, and minister's wife, she found that her new home had its own special, and often very pleasing, flavour. Her connection to the "spirit of place" enabled her to record moments of peace and reflection in the "Garden of the Wild Gods," as she described it -- as well as the occasional "bark at the moon." Aware that the world was changing and that her own style of writing was not always sufficiently "edgy," Montgomery's commentary on the transformation of the world around her is infused with characteristic wit and insight ("The mills of the gods grind slowly but they do pulverize," she notes wryly in a journal entry of May 3, 1929). As a social history of a rapidly changing Canada, Montgomery's journals -- presented here complete and unexpurgated for the first time -- offer fascinating insights. Her thoughts on her own life are also illuminating. This new edition includes more than 200 of Montgomery's own photographs, many never before published. Editor Jen Rubio has provided hundreds of annotations, all original to this edition, as well as a new introduction to the volume. 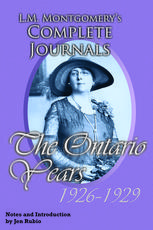 Edited and with an Introduction by Jen Rubio

L.M. Montgomery’s journals speak of simple pleasures and deep joy, dogged worries and profound disappointments. The story of her life from 1930 to 1933 is as gripping as the earlier volumes published by Rock’s Mills Press. This volume is different from earlier ones in a surprising way, however: “It has happened. It is too cruel and hideous and unexpected to write about. I have spent two days in hell. I cannot see how I am to go on living. . . . And I have had to keep up a face to the world when something in my soul was bleeding to death” (February 5, 1933). The truth of this “cruel and hideous” event is, for a time, too diffcult to commit to her journals; it casts a shadow of shame on Montgomery’s life for months. When she finally explains, it is page-turning material that gives a fascinating look into the hidden side of life in Ontario almost a century ago. Montgomery also recounts other difficult situations facing her in those years, including attempts to help a slippery young man facing embezzlement charges and a younger woman’s obsessive crush on her. Over 100 of Montgomery’s own photographs are included, many never before published. This edition also includes an introduction, extensive notes, and an index of photography, all original to this edition. 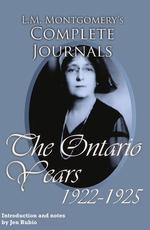 THE DIARY OF CHARLES MACNEILL,

Anne of Green Gables author L.M. Montgomery does a surprising thing in her handwritten journal of 1925: she transcribes the entire diary of PEI farmer Charles Macneill into her own work.

In an earlier  journal entry dated August 4, 1923, Montgomery recounts how on a visit to PEI that year, a friend and cousin presented her with a unique document: "Alec produced a 'diary' his father had kept for several years and we read it together. I don’t think I ever read anything quite so delicious in my life. Charles Macneill was an odd sort of a man, whom as a child I always loved because he was so kind to children.... He inherited from his mother—his father was not one of 'our' Macneills but his mother was—a queer streak of the Macneill literary knack.…"

Montgomery is fascinated by this “artless” yet compelling diary. Published now for the ﬁrst time is the full diary that she found so compelling, an atmospheric depiction of the rural Island setting found in her novels. Macneill’s diary, kept between 1892 and 1896, transports us to a time before wireless communication and industrial agriculture, where people were their own farmers, doctors, and veterinarians. As Montgomery copied out Macneill’s words, she wrote that the “sights and sounds of that old north shore farm” came back like the “voices of ghosts.” Also included in this edition is Montgomery’s commentary on the diary, where she situates herself in the diary’s world.

Her commentary is an exploration of her own unique “mind’s eye,” an exceptional ability to recall this past world with an almost overwhelming intensity.

$14.95 US and other international orders

Or order from Amazon.com or Amazon.ca

Also available on Amazon UK, Amazon Europe, and other sites