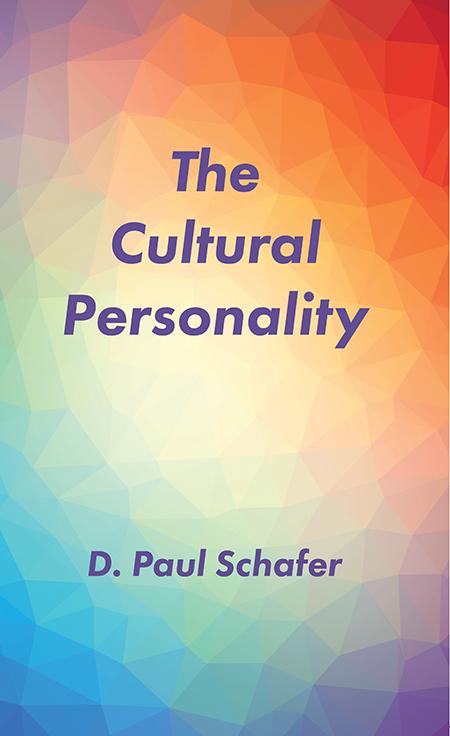 PRAISE FOR THE CULTURAL PERSONALITY

"In his latest book, The Cultural Personality, Paul Schafer offers a most introspective diagnosis of the two traditional personalities that we are quite familiar with, namely the 'economic personality' and the 'specialist personality'. He argues that both are breaking down. The former is breaking down because 'it treats people as producers and consumers of goods, services, and material wealth at a time when these practices are having a devastating effect on the natural environment and not bringing the satisfaction and happiness people expected to find in them.' The second is breaking down because we have encouraged people to develop only a single skill and occupation at a time when change is accelerating so rapidly that their skills are, or soon will be, out of date or obsolete due to developments in digital technology, ever more rapid communications, and the introduction of artificial intelligence. To address these challenges, Schafer suggests we should pay more attention to what he describes as the 'cultural personality'. As he sees it, we need to cultivate a person who is able to live life as an 'ordered whole'. This is a person who is capable of functioning in a disordered world of increasing complexity, frustration, and anxiety, such as the world we are currently experiencing. He supports his arguments with a wide range of valuable and thoughtful quotations. While this is a challenging book, I highly recommend it, as it is filled with practical advice on how human beings can function most effectively, both now and in the increasingly complex world of our children and grandchildren." -- John Hobday, former director, Canada Council for the Arts

"This book is a gem ... a valuable book that needed to be written. D. Paul Schafer presents with clarity a comprehensive guided tour into the labyrinth of challenges humankind faces in today’s world and the future, and then a passageway out. In the process he harvests wisdom and adds his own, distills complexity, provides understanding and a prescription for self-actualization, a moral and ethical compass, and a better world. He offers optimism through the development of a cultural personality. A remarkable book, rich in thought provoking content, which invites study and repeated reading." -- William Thachuk

PRAISE FOR THE CULTURAL PERSONALITY

"The Cultural Personality by Paul Schafer is a pioneering work and potent read. In our current times of an emerging planetary consciousness, intense interfusion of cultures, a collective quest for belonging, juxtaposed with cultural deterioration, lack of personal and shared meaning, widespread confusion and disorientation, [Schafer's concept of] the cultural personality offers a highly relevant compass for our individual and collective lives to propel us into a culturally rich and meaningful future. Schafer’s book beautifully combines personal development and societal renewal. What I found particularly helpful, is that the author – seemingly a 'practitioner of a deeply felt global humanism' – did not stop by laying out the context, concept and characteristics of the cultural personality, but also explains how its cultivation and conduct can be brought about. He thereby offers simultaneously a language and a practice for a much needed cultural evolution of humanity. In short, I regard the articulation of the cultural personality by Paul Schafer of vital importance. I strongly recommend this brief, succinct read for anyone participating in or seeking to contribute to the urgent cultural revitalization of our societies and of humanity as a global community." -- Prof. Alexander Schieffer, co-Founder, TRANS4M Center for Integral Development, Geneva, Switzerland and Hotonnes, France; series co-editor, Routledge Transformation and Innovation Series

Lately, there has been a resurgence of interest in archetypes and personality templates. Some are revisiting Carl Jung’s archetypes and others, particularly concerned with the decline of male identity, harken back to Joseph Campbell's heroes. We are looking for something, perhaps something we sense we have lost. Paul Schafer's work offers us a fresh approach to identity formation information, a new model, if you will, something that pulls old models together and allows them to work for us again. Put briefly, The Cultural Personality expresses Schafer’s belief that human beings should be holistic, centered, creative, altruistic, and humane. If this sounds abstract and vague, perhaps a bit too touchy-feely, this short essay is about the thinking and behavior that give the cultural personality substance, flesh and bones, heart and soul. The author begins our journey by a hard look the demands of the current context in which we live. This necessitates the emergence of the concept of the cultural personality, a description of its characteristics, how to cultivate it, and its resultant behaviors, namely living out this model in our everyday words and actions. All this in slightly less than 100 pages.

We are immersed in and we are culture, as well as being its makers, so why should we not be known as such? One contemporary temptation is to abandon the hard-won riches of humanity, to escape into a naysaying individualism, deliberately not knowing whence we came and where we are going. The alternative temptation is to adopt a narrow protective, populist shell, excluding all culture but that proudly touted as one’s own. Many young people today are either floating meaninglessly “above it all” or immersed in the meanness of Generation Identity. We need to turn inherent and ambient culture from being a burden on our lives to a treasure house of resources, offering to become integrated, incarnate in the self. In a world knowing violence and pain as well as commodification of all sorts and at every level, this may not be easy. Resentment, anger or the desire to escape seem the logical choices for survival rather than cultivating a cultural personality, literally a place for appreciation, warmth, sharing, creativity and solidarity.

We have a choice, not simply of which mask to wear but which persona to create. Yes, we become individuals, we achieve uniqueness, but not through the sour emptiness of rejection but rather through the transparency and embrace of enlightened perception, which, if we are to believe what current neuroscience is telling us, becomes not just something we have but something we are. The pages of The Cultural Personality model what they preach, delving richly into worldwide cultural resources and the wisdom of those who have yearned for, ingested and broadcast them throughout the ages. Too often, I hear the claim that abandoning one’s cultures allows one to claim to be a “cosmopolitan”, not realizing that the word cosmos means ‘the world” but it contains the sense of its beauty, order and integrity. We thank the author for reminding us to embrace it. -- George F. Simons

D. Paul Schafer has worked in the cultural field for more than five decades as an educator, advisor, administrator, and researcher. He was Assistant Director of the Ontario Arts Council from 1967 to 1970, a founder and Director of York University's Programme in Arts and Media Administration from 1970 to 1974, and Coordinator of the Cooperative Programme in Arts Administration and the Cooperative Programme in International Development at the University of Toronto from 1984 to 1990. He has taught arts administration and cultural policy at York University and the University of Toronto, executed a number of projects for Canada's Department of External Affairs, and undertaken several advisory missions for UNESCO to different parts of the world. He was originally trained as an economist, and taught economics at Dalhousie University and Acadia University before entering the cultural field, specializing in international development, principles of economics, and the history of economic thought.

Paul is the author of many books and articles on culture and the arts in general and Canadian culture and the arts in Canada in particular, including Culture: Beacon of the Future (Greenwood Publishing), Revolution or Renaissance: Making the Transition from an Economic Age to a Cultural Age (University of Ottawa Press), and Aspects of Canadian Cultural Policy (UNESCO).

His latest books, The Age of Culture, The Secrets of Culture, Celebrating Canadian Creativity, and Will This Be Canada's Century? are all available from Rock's Mills Press. 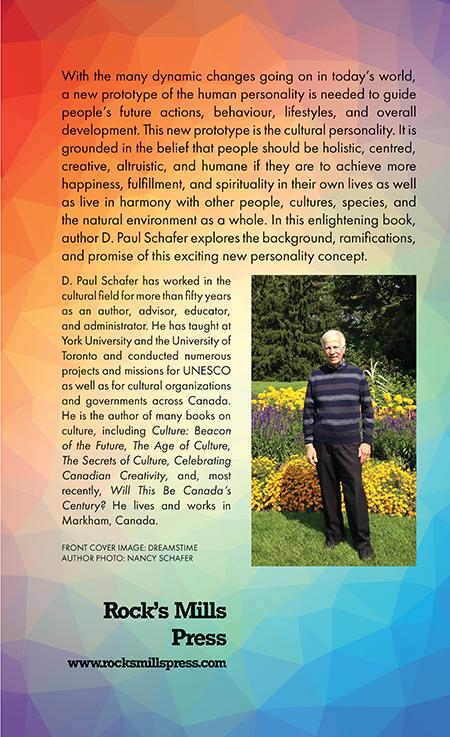 With the many dynamic changes going on in today’s world, a new prototype of the human personality is needed to guide people’s future actions, behaviour, lifestyles, and overall development. This new prototype is the cultural personality. It is grounded in the belief that people should be holistic, centred, creative, altruistic, and humane if they are to achieve more happiness, fulfillment, and spirituality in their own lives as well as live in harmony with other people, cultures, species, and the natural environment as a whole.