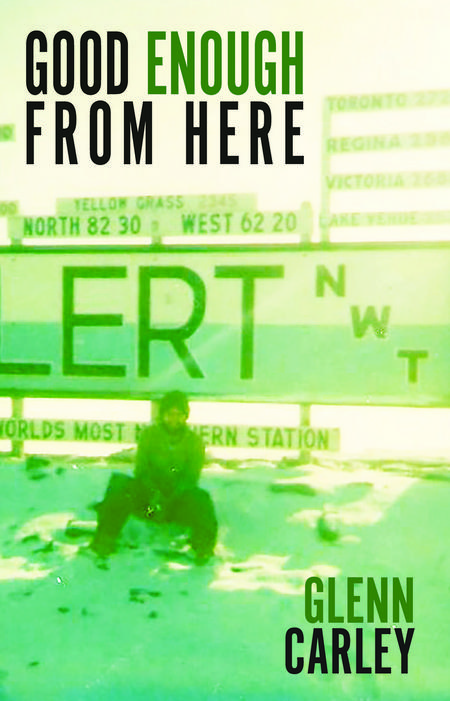 Good Enough from Here is a compelling work of creative nonfiction, an artifact of Canadiana, set in the real-life geographical and historical context of Canadian Forces Station (CFS) ALERT on the northern tip of Ellesmere Island in the late 1970s. Considered at the time Canada’s most northerly permanently inhabited location, the small, orange civilization within the base perimeter serves as a stage for the interplay of relationships among companions, father figures, military culture—perhaps a micro-prophecy of the country and its future within the Inuit animism of the landscape itself.

The tale traces the unlikely journey of a band of young men from a small southern Ontario town to the expanse of Canada’s High Arctic.  Part of an environmental clean-up crew, they confront the technological spoor and detritus accumulated since the station’s founding in 1950. The Midnight Sun, the sheer isolation, even the magical realism of certain rooms in certain buildings call out to each of them.

Good Enough from Here is, in the author’s words, “a quirky environmental tale of the transformation of an irreverent society of youthful ‘Frozen Chosen’ into a primitive state of young manhood”—a coming-of-age story taking a bird’s-eye view of military culture from a civilian’s perspective.  But finally it is what is known as Inuit Nunangata Ungata, the land beyond the land of the people, that takes centre stage, then as now tolerating the world’s geopolitical, ecological and sovereign attention.

PRAISE FOR GOOD ENOUGH FROM HERE

“A small percentage of the population has lived in or have visited the Arctic. A few have visited Canadian Forces Station Alert. They have been forever changed by the experience. The long flight over uninhabited wilderness, muskeg, tundra and glaciers; the expanse, timelessness, starkness and beauty of the landscape; and the challenge of the work and isolation can have a spiritual effect on a person as they may better sense their place, time, and fragility in the universe. Good Enough from Here, about a young man’s summer in Alert, hit home as authentic. It resonated with my experiences at Alert and while visiting other northern radar sites and construction camps. I invite military readers, all those who served at Alert, their families, and all those who have heard about Alert or are interested in one young man’s northern adventure to read this book.” —Major Scott Munn, retired, M.Eng., CD, RMC