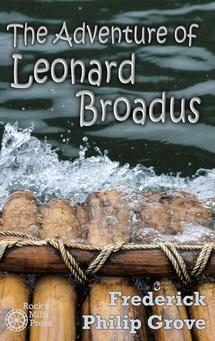 A new edition of Grove’s little-known novel for children …

“I set out to write what would have delighted my heart at the age of twelve,” wrote Grove to his publishers in 1939, describing his writing of this short novel. His first child, May, had died of appendicitis at age twelve – a loss that devastated Grove and his wife Catherine. His second child, Leonard, was the inspiration behind this action-packed “boy’s-own” tale of survival, resourcefulness, and intrigue set in Depression-era Ontario. The novel was first published in 1939 as installments in a church magazine, heavily redacted and poorly publicized. The Adventure of Leonard Broadus is now available as Grove originally wrote it.

The coming-of-age story begins with a robbery and a runaway raft adventure. In the style of classic children’s literature like Swallows and Amazons and Huckleberry Finn, the danger that follows soon begins to feel very real. The fast-moving and very readable narrative depicts Leonard’s resourcefulness and endurance, qualities that enable him to survive some alarming circumstances.

Grove was a first-rate writer and story-teller, with keen abilities as a realist. He was also a man of many sides who had emigrated to Canada from a dark past in Europe. Ontario in the late 1930s is depicted as a very different society than today, with impoverished “hobos” travelling the countryside. Leonard’s adventure may well recall some of Grove’s own early travels in the new world.

"In publishing Frederick Philip Grove's The Adventure of Leonard Broadus, Rock's Mills Press has brought to light a boys' adventure novel that some will regard as a Canadian classic. Recommended." -- Ruth Latta, CM Magazine. Read the full review.

THE ADVENTURE OF LEONARD BROADUS