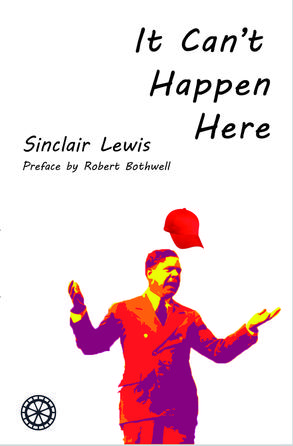 With a New Preface by Robert Bothwell

"Lewis's [character] Windrip is a version of a rising demagogue of that time [Huey Long]. . . . Three-quarters of a century ago, Lewis argued that fascism and totalitarianism could happen here. Could it?" --Chicago Tribune, March 2016

"Election year 2016 like election year 1936 offered an opportunity for Tea Party doctrines to find expression, a leader and a majority. . . . Trump appealed to . . . people who longed for a simpler past in which there were no disturbing minorities, the sky was blue, and the convertible was filled with cheap gas." -- From Robert Bothwell's Preface

Sinclair Lewis's 1935 novel remains jaw-droppingly readable with its account of populism, politics, and power in America. This new edition features a lively preface by Robert Bothwell, who draws some fascinating parallels between the political atmosphere of 1935 and that of 2016. The connections are striking: so-called politically incorrect "everyman" rhetoric, Revolutionary War symbolism, and even the nervous belief that "It Can't Happen Here."

Sinclair Lewis (1885-1951) was a novelist, short-story writer, and playwright. He was the first American to receive the Nobel Prize for literature.

Robert Bothwell is director of the International Relations program at Trinity College at the University of Toronto, and a leading authority on relations between Canada and the United States.

For copyright reasons, this edition is only for sale in Canada and other countries where works enter the public domain 50 years after the end of the year of the author's death.