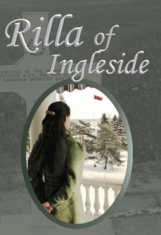 “There is absolutely no one around here who seems to realize the war. I believe it is well they do not. If all felt as I do over it the work of the country would certainly suffer.” In her journal entry for January 1, 1915, L.M. Montgomery lamented the absence of close companions with whom to discuss the war in her new life as a minister’s wife in the rural community of Leaskdale, Ontario. Montgomery would work hard throughout the war years, contributing to the war effort as well as helping her husband in his role as minister. But there were few people with whom she could discuss the terrible events of the time. Instead, she carefully and quietly recorded war news in her journals. Two years after the war ended, she used this material to write Rilla of Ingleside – a novel about endurance and sacrifice on the Canadian home front. Here, characters follow the international conflict closely and share the experience of fear, dread, and loss. Rilla matures during the war years, learning to endure hard work and loneliness, and the death of her beloved brother Walter (Walter is widely accepted to be a fictional version of John McCrae, the Canadian soldier who composed “In Flanders Fields”).

New notes based on the latest research about Canada in World War I show that Montgomery’s analysis of war was surprisingly accurate. Written as a companion to the new previously unpublished full edition of Montgomery’s wartime journals, this new edition will add to our knowledge of Montgomery as well as Canada’s role in the war. It also features two rare photos, one which appears to have been the inspiration for Rilla, the other for Rilla's fiance.

About the Author: Lucy Maud Montgomery (1874–1942) was the author of many best-selling novels, including Anne of Green Gables.

​Introduction and Notes by Jen Rubio