As the author notes in his introduction, this fascinating and insightful book is "family history with a context." Placing the lives of his parents, John Hair and Alice Runnalls, at the centre of the narrative, Dr. Hair explores the history and culture of Southwestern Ontario, that great peninsula of fertile farmland lying between Lake Erie and Lake Huron.

Dubbed "Souwesto" in the 1960s by artist Greg Curnoe and playwright James Reaney, the region was home to the kind of people that Alice Munro writes about in her short stories--people mostly of Scots-Irish descent; Protestant; practical, hard-working people attached to the land, defining their community as their school section and their social milieu as their rural Methodist or Presbyterian church.

Souwesto Lives tells their story, beginning in the first days of European settlement, continuing through the clearing of "the bush" and into the twentieth century, when the coming of the telephone and rural electrification marked the beginning of social and technological changes that would change the area forever. It is a story of the movement from country to city, from family farm to suburban lot, told with verve and affection.

Natives of Souwesto, historians and genealogists, and the general reader all will find much to treasure in this detailed portrait of a region, its people, and a family.

Donald S, Hair is professor emeritus in the Department of English and Writing Studies at Western University in London, Ontario. A specialist in Victorian literature, he is the author of a number of other books, including Fresh Strange Music: Elizabeth Barrett Bro Browning's Language. He was the recipient of the Edward G. Pleva Award for Excellence in Teaching in 2001-02. 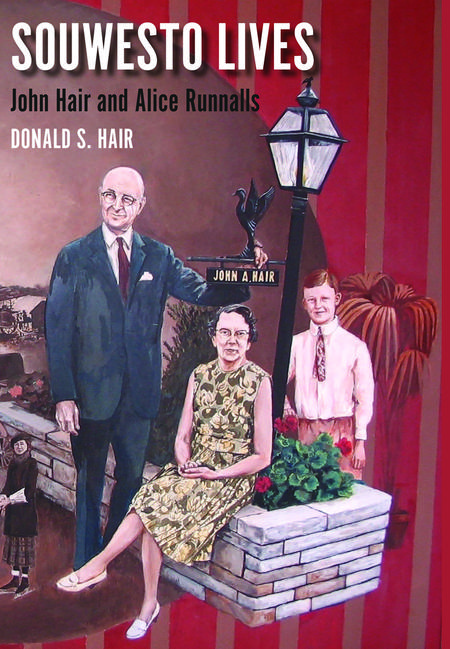 This is a family history, but a family history with a context. At its centre are the lives of John Hair and Alice  Runnalls, my parents; the context is the society and culture of Souwesto where they lived.

My father was a great story-teller, and one purpose of this narrative is to preserve as many of those stories as I remember. From my earliest childhood, when I was with him at the barn or back at the bush, mending fences or driving to the feed mill in town, he would tell me about grandparents and great-grandparents, relatives and neighbours,  ministers and local officials, stories about his childhood and school days and young adulthood in Brooke Township, so I grew up with a strong sense of place and time, now in danger of disappearing when my own memory is no more. For I am mindful of Sir Thomas Browne, that wise seventeenth-century English physician, and his saying, in his meditation upon burial urns discovered in an English field, that there is no antidote against time: “Our Fathers finde their graves in our short memories, and sadly tell us how we may be buried in our Survivors.”

My father was not the only story-teller; my mother, too, had stories, stories about growing up in Caradoc Township in Middlesex County. When I started putting her stories and my father’s stories together with a factual narrative of my parents’ lives, I soon began to realize how much their experiences reflected the social, political and religious concerns of the first half of the twentieth century, the ways of thinking and ways of doing things that made up the culture of southwestern Ontario at that time. So this book is more than just a family history: it is an attempt to record what life was like from the days of first immigration to the early 1980s.

My parents lived in that part of the province of Ontario called, by Greg Curnoe, James Reaney, and others, “Souwesto”—southwestern Ontario, that is, that great stretch of fertile land between Lakes Huron and Erie. I attempt to define the character of that region and of its people—the same kinds of people James Reaney has as his forebears and Alice Munro writes about in her short stories, people mostly of Scots-Irish descent; Protestant; practical, hard-working people attached to the land, defining their community as their school section and their social milieu as their rural Methodist or Presbyterian church. My mother and father were part of that great shift in Canadian demographics, from the family farm and a predominantly rural society to a mostly urban setting and lifestyle, for my father left farming when he was in his forties and my parents eventually became city-dwellers. My story is also an attempt to set my parents’ lives in their historical context: the opening up of the West, the introduction of the rural telephone and rural mail delivery, the First World War, the shift from the horse-and-buggy to the automobile, the Great Depression, the Second World War, and the great economic expansion following that conflict. That context includes politics, for my father and mother, while mainly Liberal in their political sympathies, both had links with the United Farmers of Ontario, and later my father was deeply involved in political affairs at the municipal level. That historical context also includes religion, for the Hairs came out of a strongly Methodist tradition; and while my Runnalls grandparents were Presbyterians, the rest of Grandad Runnalls’ family, like many Cornish people, was Methodist. It is no surprise that my parents were members of the United Church of Canada.

The word “Souwesto” first appeared in the 1960s, popularized, as I have already said, by the artist Greg Curnoe and by James Reaney. At that time Reaney was doing the archival research for his trilogy of plays, The Donnellys, and, to gain a firm documentary sense of life in Biddulph Township in the 1860s and 70s, he read straight through the issues of the London Free Press and the London Advertiser as if they were novels: novels with a large cast of characters and with a fragmented and discontinuous narrative, but novels, nonetheless, with an instinctive sense of place, novels that reflected the nature of the community where they were written simply because they could not tell their stories in any other way. For me, the Watford Guide-Advocate and the Strathroy Age-Dispatch have been the same kind of novel, and my narrative, as the reader will see, owes a great deal to those small-town weekly newspapers.

But the Guide and the Age are not my only sources. Though my parents destroyed most letters (like many people in Souwesto, they thought there was something vaguely disgraceful about any personal revelation), my mother did construct a family tree, and both she and my father, at my urging, wrote accounts of their early lives. Aunt Mima Thompson, having passed her one-hundredth birthday, reminisced about the early life of the Runnallses in Dawn Township, and her daughters circulated the typescript to other family members. Catherine Watson brought together a great deal of material on our Watson and Campbell ancestors. And my cousin Helen Clark wrote and published the first complete history of the Hair(e) family, and did subsequent research not only on Brooke Township, Walnut and Watford, but also on missing bits and pieces in an earlier history, W.H. Johnson’s 1940 account of the descendants of our ancestor Eliza England. Finally, my sister’s memories have been invaluable, both as a supplement and a corrective to mine.

I have tried to integrate all that material into a continuous narrative.