THE RASHOMON TEA AND SAKE SHOP

Is the road to hell paved with good intentions? Or maybe it’s paved with questionable actions. Perhaps there is no hell, never mind a road to it.

Phil has a problem, and he calls his two best friends to join him from the other side of the world, as he attempts to determine the way forward. Phil presses his friends Max and Michal to provide him with perspective, and maybe a healthy dose of hope or faith as well.

This is a tale of tea, sake, bourbon, rain, golden fields, special guest stars, ants, omelets, and most importantly, potholes -- both the literal potholes of the neglected road to Phil's ryokan and metaphorical potholes of doubt as the three friends struggle to find truth. Along the way, all three will have their beliefs challenged by inner demons -- as well as by others who make a more tangible appearance -- as they try to find the answer to Phil’s question, “What do you believe -- and why?”

Carol Quinn is an associate professor of philosophy and was the first coordinator of the Women’s Studies department's Genders and Sexualities Minor at Metropolitan State University of Denver. She is a board member of Lutheran Campus Ministries, ELCA, at the University of Colorado Boulder and is involved with its LGBT+ Students of Faith group. She was born in Encino, California (a true Valley girl), and her heart is divided between California and Colorado (if only Colorado had the ocean!). In addition to her academic pursuits, she enjoys drawing in oil pastels, anything Shakespeare, playing the guitar (badly), walking her four obnoxious dogs, traveling (especially to see grandkids in Bristol, UK), and hanging out with her wonderful husband and family.

Kait and Kyle Cottengim travel the world through food and wine, frequent tech stores and coffee houses, and understand why there is so much philosophical debate surrounding Blade Runner. Kyle is a network engineer by day. He has studied a diverse range of subjects, from art to Zen, computer science to philosophy, earning two degrees in the process. Kait is an art teacher by profession, and when she is not studying various subjects including anthropology and psychology with Kyle, she is a voracious reader of fantasy literature and loves exploring new worlds. When not writing, they can be found drinking coffee or single barrel, playing games, or cooking adventurous cuisine with family and friends. The Cottengims live in Denver with their equally geeky tween son Galen, their two not-so-silent cats, and their warring library of art, philosophy, and gaming reference books.

Apart from being a great read, The Rashomon Tea and Sake Shop is ideal for introductory and upper-level philosophy courses at the university level that focus on such topics as the existence of God, the nature of knowledge, what it means to live a "good" life, feminist critiques of Western philosophy, and many other subjects. An annotated table of contents of philosophical and theological topics, a name index of key philosophers, theologians, and other writers and thinkers cited in the book, and extensive references help readers find important subjects and provide suggestions for further reading. The Special Edition for course use includes 4 pages of discussion and review questions. 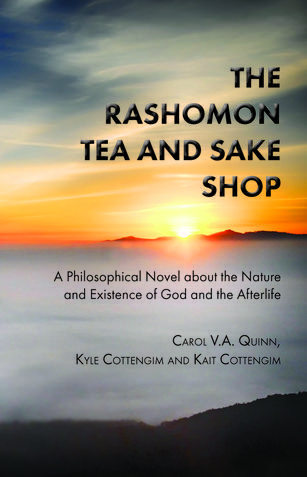