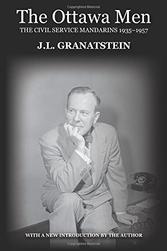 ​
Granatstein’s classic book remains the only comprehensive account of the formative years of the federal civil service. Drawing on extensive archival research and in-depth interviews with the surviving “Ottawa men” and their colleagues, Granatstein shows how a small group of individuals – including men such as Lester Pearson, who went on to win the Nobel Peace Prize and become Prime Minister of Canada – worked to create what many observers acknowledged as the most effective public service in the Western world, leading Canada through the Great Depression and World War Two to full nationhood and a major role after the war as the world’s leading “middle power.”

This re-issue includes a new introduction by the author that surveys research since the book was originally published, as well as a new portfolio of photographs.

Extensive notes, a bibliographical essay dealing with primary sources, and a full index make the book a useful reference. Where necessary, corrections have been made to the text of the original edition.

About the Author:  J. L. (“Jack”) Granatstein has been described by The Canadian Encyclopedia as “the most prolific Canadian historian of his generations,” whose writings are “characterized by lucid prose.” He taught for many years at York University, has served as head of the Canadian War Museum, and was named to the Order of Canada. His books include The Generals: The Canadian Army's Senior Commanders in the Second World War (1993), which won two national awards, and Canada's Army: Waging War and Keeping the Peace (2002).

INTRODUCTION TO THE NEW EDITION
PREFACE
ACKNOWLEDGEMENTS
1. The Mandarins
2. The Early Civil Service
3. The Founders
4. The Isolationist Nationalists
5. The Road to Functionalism
6. New Men, New Ideas
7. Organization and Politics
8. The Russians, the Americans, and Us
9. The End of the Mandarin Era
NOTES
BIBLIOGRAPHY OF MAJOR PRIMARY SOURCES
INDEX