ABOUT THE AUTHOR
Robert W. Passfield is a history graduate of the University of Western Ontario (Honours History, 1968) and of McMaster University (M.A., 1969), where he pursued Ph.D. studies in Canadian history and three minor fields: political philosophy, modern European history, and diplomatic history. In graduate school he undertook to prepare a dissertation on 'The Upper Canadian Tory Mind', which was to focus on the Anglican Tories of the Province of Upper Canada (Ontario) in the post-­War of 1812 period. After a forty-year hiatus, that abortive thesis text has been incorporated into this present book.

Passfield is an advocate of a cultural values approach to the writing of history, which involves much more than a recording of 'what happened'. To truly understand an historical period, the historian must enter the mind of the protagonists to comprehend their respective principles, values and beliefs within the context of their existing condition and circumstance. In effect, 'ideas influence actions' and, as argued in this study, it was the values, beliefs and principles of the Upper Canadian Anglican Tories -- their mind -- ­that guided and governed their efforts to build a traditional Christian conservative nation in North America. 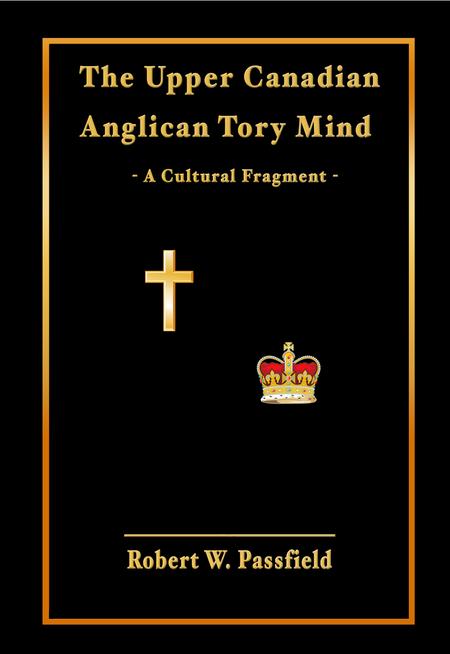 This study of the Upper Canadian Anglican Tory Mind is based on the concept that ‘ideas influence actions’, and a concomitant belief that to truly understand historical events, the historian must enter into the mind of the protagonists to determine their particular principles, beliefs and values while being cognizant of their circumstance. To that end, the focus of the book is on the constitutional, religious and educational ideas and worldview of the Upper Canadian Anglican Tories who governed the Province of Upper Canada (Ontario) for two decades following the War of 1812, and their response to the public issues of their day within that intellectual context.

It is the contention of this study that the Upper Canadian Anglican Tories were true philosophical conservatives who evolved a unique variant of English Anglican Toryism, and who were committed to defending and strengthening the traditional political order, loyalty to the Crown, and the unity of the British Empire, in the Loyalist asylum of Upper Canada.

The political thought of the Tories of Upper Canada was an amalgam of an Anglican political philosophy that embodied a Christian theology and worldview, a theory of the union of church and state, and a concept of natural law, as forged at the time of the English Reformation; the Old Tory concept of the sovereignty of the Crown, the rule of law, and the ‘historic rights of Englishmen’; the 18th Century English Tory view of the balanced British Constitution that grew out of the Glorious Revolution of 1688; and the concept of a ‘national system’ of education that was derived from Scotland.

In its entirety, this study is the most comprehensive elaboration of the beliefs, values and principles of Anglican Toryism since the published works of the Anglican divine, Richard Hooker, at the time of the English Reformation.  In retrospect, it illuminates the historical phenomenon of the Anglican Tory cultural fragment that is present today in the political culture of English Canada.

For those who are alarmed at how the natural rights doctrine and individualism of Lockean-liberalism has degenerated into moral relativism, libertarianism, narcissism, and an identity politics that is destructive of the national character and any concept of a ‘common good’ that transcends individual and group interests, this book presents an older alternative view of the nature of man, the purpose of life, and the basis of human happiness and social harmony.