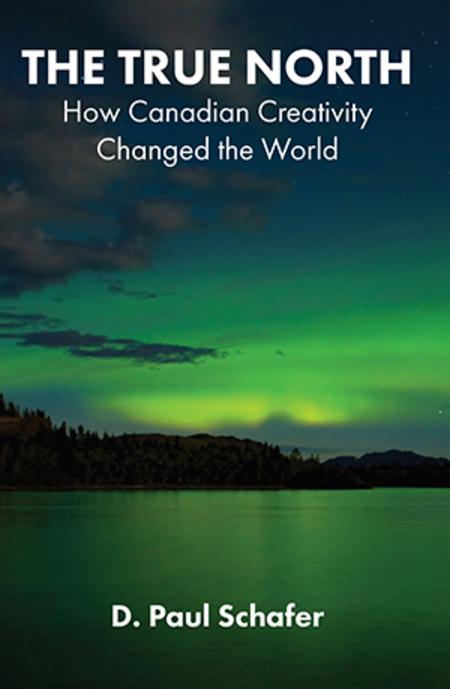 How Canadian Creativity Changed the World

In The True North: How Canadian Creativity Changed the World, D. Paul Schafer explores the extraordinary legacy of generations of Canadian artists, inventors, scientists, politicians, and activists—a legacy of creativity that has not only shaped today’s Canada but has made a huge impact on the world as a whole. Among the many fascinating facts you’ll learn while reading The True North:

• Alexander Graham Bell is best-known as the inventor of the telephone, but he was active in many other fields of invention, including aviation and the development of the hydrofoil.

• Anne Innis Dagg, known for her pioneering work on the behaviour of giraffes, comes from a family renowned for its contributions to Canadian scholarship: her father, Harold Innis, was a celebrated economic historian and her mother, Mary Quayle Innis, a noted author and academic administrator.

• When the Toronto Raptors won the 2019 NBA championship, the whole country rejoiced, particularly because the roots of this internationally popular sport can be traced back to the game’s inventor, James Naismith, a Canadian, who was born in Almonte, Ontario.

In addition to describing the many ways in which Canadian creativity has shaped the world, the author in his concluding chapter also considers how these and other contributions might be enhanced and expanded in the years ahead, particularly in such areas as the environment, multiculturalism, the arts, and artificial intelligence.

D. Paul Schafer has worked in the cultural field for more than fifty years as an author, advisor, educator, and administrator. He has taught at York University and the University of Toronto and conducted numerous projects and missions for UNESCO as well as for cultural organizations and governments across Canada. He is the author of many books on culture, including Culture: Beacon of the Future, The Age of Culture, The Secrets of Culture, Celebrating Canadian Creativity, The Cultural Personality, and Will This Be Canada’s Century? He lives and works in Markham, Canada.