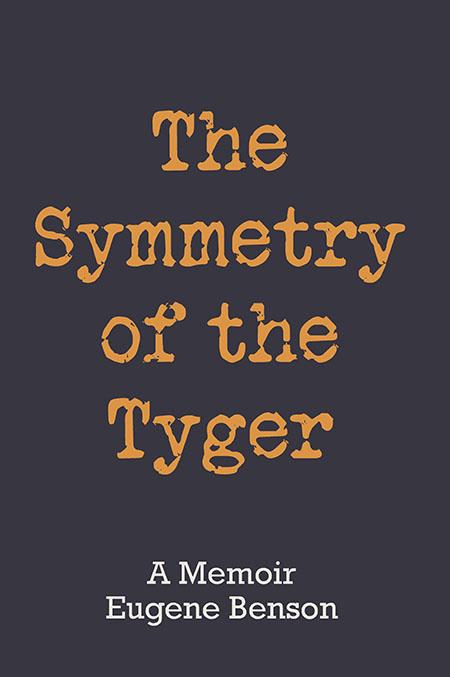 THE SYMMETRY OF THE TYGER

Writer, would-be Catholic priest, editor, librettist, and professor, Eugene Benson surveys ninety years of travel, adventure, and engagement at the very heart of Canadian culture. Born in Ireland, Benson's early recollections recall a world of political troubles, war, and wavering religious devotion. His adventures working and travelling across the globe are both fascinating and sometimes eyebrow-raising. Benson's involvement in Canadian cultural affairs took place at a time when this country was becoming an important presence on the world stage. Benson's memories of many of the key figures that shaped it, including Northrop Frye and Marshall McLuhan, are deeply insightful, his perspective witty and humanistic.

PRAISE FOR THE SYMMETRY OF THE TYGER

There is a surprisingly broad sweep to Eugene Benson’s memoir, in places, people and ideas. He is a seeker and adventurer, delving deeply into subjects as diverse as theology, the barbarism of bullfights and musicology. Benson has written this eloquent, clear-minded book at age 90. His powers of recall reach not just the events, places and people of his life, but actual conversations. And they are interesting!

"The exercise of writing an autobiography is sometimes an exercise in evasion" Benson says at the beginning of his book. He seems to be not guilty of that except for the two most traumatic experiences of his life. He cannot describe the emotional pain he went through in deciding the priesthood was not for him. The other is in late life when his beloved German-Canadian wife dies of dementia. In between are vivid, lively, insightful accounts of his adventures when he emigrated to Canada and taught in a remote Saskatchewan school with all grades in the one room. He held odd jobs in Vancouver, wrote a novel in Mexico, became a dishwasher of no fixed address in Toronto, taught English to immigrant pilots, then did his PhD at University of Toronto.

There, caught in the unacknowledged rivalry between Northrop Frye and Marshall McLuhan, Benson almost failed his oral exam by politely telling McLuhan his questioning was unintelligible. Then began his secure academic career helping to build the Department of English at Guelph University as he contributed important books on Canadian theatre, wrote libretti for avant-garde operas, promoted the Guelph music festival and worked with the prominent Canadian writers of the 1970s and ’80s. He became a particular friend of Graeme Gibson and chaired the Writers’ Union of Canada in 1983-84. Margaret Atwood called on him to serve on the first executive of PEN Canada. Through his portraits of friendship with the greats of the Canadian music and literary world emerges a fascinating portrait of the talented, valuable Eugene Benson.

—Dorris Heffron, author of City Wolves and other novels

This is a book about a long life, a fruitful life and a colourful life: the life of a young man growing up in Ireland, a student priest, traveller, writer, editor, academic, politician, librettist, husband and more, but ultimately someone whose heart was given to help forge a Canadian national cultural identity with like-minded friends and colleagues.

His memoir consists of two parts: the young man finding his way and the mature actor, engaging with the arts creatively and professionally.

In the first part Benson describes his background and influences. He describes the role of serendipity in his life—the seemingly arbitrary twists and turns his life took: country-school teacher, dishwasher, Royal Canadian Air Force language teacher, university professor, novelist, etc.  Here his writing is full of colour—the colour of characters and places—told with lightness and deftness as with a watercolour brush that sketches the moment lived, and with the vividness and charm of a practiced raconteur. Given the length, breadth and depth of the author’s life experiences, this is a story that could bear a heavier impasto in retelling. But, rightly I think, the author has relied on his charm and humour to guide the reader, rather than his undoubted academic qualities, and to carry that reader along using a conversational narrative style.

There is no trace of self-elevation as Benson introduces you to famous friends, colleagues and acquaintances in the realms of music, literature and academia as he makes his way in his career(s) as novelist, playwright, librettist, university lecturer and member and president of many foremost Canadian cultural institutions. The story of his and Margaret Atwood’s involvement with the Writers Union of Canada and PEN Canada is a fascinating account of encouraging the development of Canadian writers and artists in a post-colonial context against the market-dominance of what Benson calls “American juggernaut” culture. Nor in his “retirement” have the last two decades been unproductive and disengaged, either academically or creatively. Benson continued and continues to work and publish, and the memoir includes detailed accounts of his editorial work (The Oxford Companion to Canadian Literature and Encyclopedia of Post-Colonial Literatures in English) and of his opera and musical writing.