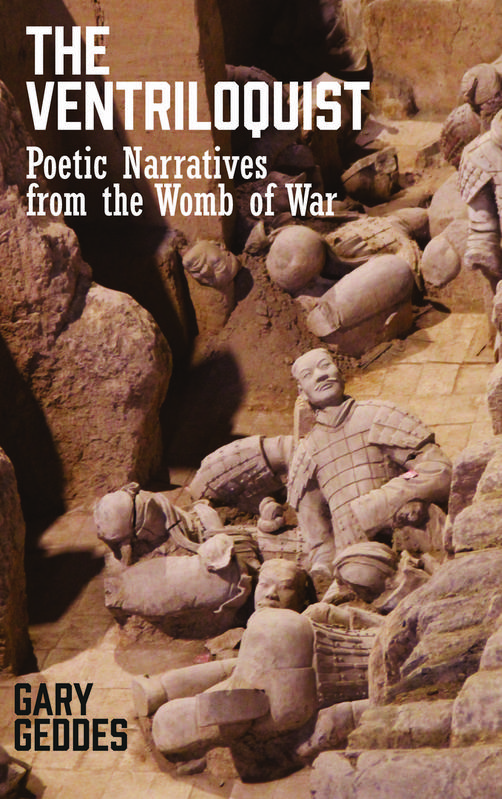 Poetic Narratives from the Womb of War

The Ventriloquist gives us four fearless and seminal works by one of Canada's master poets. A scathing indictment of war and its ravages, it's also a testament to the power of poetic narrative.

Gary Geddes is known for his first-person narrative poems and “seamless impersonations.” Those figures reaching out from the near or distant past to have their story told include a youth in charge of horses on a doomed and bloody mission to the New World during the Spanish conquest; a so-called “mad bomber” who dies in a washroom of the House of Commons when the dynamite he is carrying explodes; a wily and outrageous Chinese sculptor and his legion of warrior subjects struggling against imperial edicts to conform; and POWs in Hong Kong and Japan in World War II doing their damnedest to survive, a struggle that continued back home in the face of shocking neglect.

Geddes finds the phrase that best describes this kind of historical rescue work is “the ventriloquism of history,” but jokingly admits that he’s never quite sure if he’s ventriloquist or dummy. The critics have no doubt about this, however, calling his work “stunning,” “wonderful,” and “breathtaking in its imaginative reach and verbal dexterity.”

Robert Kroetsch described War & Other Measures as “the kind of poem poets are only supposed to be able to dream ... the sustained calibration is beautiful. I didn’t know the long poem could be so taut.... The years of art and craft are in the book.” Hong Kong Poems prompted Michael Estok to say in a review in The Fiddlehead: “It is a weighty and worthy and admirable undertaking.... [Geddes’s] book of elegies puts him on the same level of poetic intensity (perhaps he even surpasses it) of Milton’s ‘Lycidas’ or Tennyson’s In Memoriam.” As for The Terracotta Army, W.H. New recalled: "I was on the Commonwealth Poetry Prize Jury the year The Terracotta Army won the Americas Division Prize; it was the jury's unanimous choice, breathtaking in its imaginative reach, its verbal dexterity.” Of the same book, Margaret Laurence observed. “[Geddes's] talent is to connect with some of those ancestral figures and give them to us ... the poem cycle for the China figures is a NOBLE one ... wonderful stuff ... I was stunned and awed and this is so good.”

Such words of praise are reflected in the awards the books received on first publication: the E.J. Pratt Medal and Prize, Writers Choice Award, National Magazine Gold Award, and Commonwealth Poetry Prize (Americas Region). The Terracotta Army, which won the latter award, was also dramatized and broadcast by CBC and BBC radio.

Gary Geddes has written and edited more than fifty books of poetry, fiction, drama, non-fiction, criticism, translation and anthologies and has received more than a dozen national and international literary awards, including the National Magazine Gold Award. the Commonwealth Poetry Prize (Americas Region), the Lt.-Governor’s Award for Literary Excellence and the Gabriela Mistral Prize from the Government of Chile, awarded simultaneously to Octavio Paz, Vaclav Havel, Ernesto Cardenal, Rafael Alberti, and Mario Benedetti. He taught English and Creative Writing for many years at Concordia University and has served as writer-in-residence at universities and libraries in Edmonton, Ottawa, Vancouver, Nanaimo and  New Westminster, as well as Visiting Writer at University of Missouri-St. Louis and Distinguished Professor of Canadian Culture at Western Washington University in Bellingham. He lectures and performs  worldwide. His work has been translated into French, Spanish, Italian, Dutch, Portuguese and Chinese. He lives on Thetis Island with his wife, the novelist Ann Eriksson.

FREE SHIPPING IN CANADA, US, UK, EU, AND AUSTRALIA

The Ventriloquist is also available through these retailers: